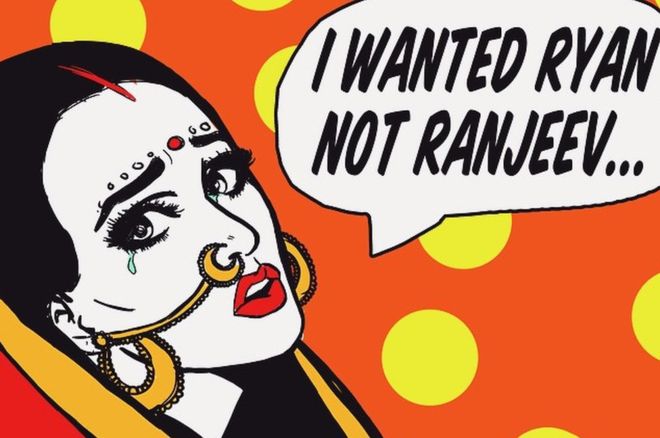 If you’ve been reading our columns on the regular (we highly recommend you do) chances are you’ve figured our undying love for Desi Twitter. And why wouldn’t we love it? It’s where all our favorite Desi people converge. But it’s not only a community for the Desi around the world (we are a tight-knit bunch), but Desi twitter is also a platform for talented creative to showcase their work and even translate it into a business. Many of our favorite South Asian beauty bloggers got their start off YouTube and Instagram. But today we want to introduce you to our favorite graphic artists, who not only filter their art through a uniquely Desi lens but also aren’t afraid to poke fun at harmful prejudices within the community while they’re at it.

Maria Qamar @hatecopy – With the level of fame and recognition this 26-year old Canadian-Pakistani artist has achieved, it’s hard to believe that she started showing her art only a little over four years ago. Known for her Roy Lichtenstein inspired ‘Desi-pop’ style, her art often features dramatically drawn South Asian women with full red lips, dangling chandelier earrings and a huge bindi taking on a prickly South Asian aunty. Her recent book, Trust No Aunty deals in more detail with the topic of South Asian aunties who make sure that everyone’s business is their business. While her website carries merch based on her art, Qamar has also lent her artistic style to several brands, including Saavn, one of the biggest streaming services for Hindi, Bollywood and regional South Asian music. One of the most visible South Asian graphic artists of the moment, it’s no surprise that Qamar’s found fans in Mindy Kaling (she even featured her art in The Mindy Project), Hasan Minaj, Kal Penn, and Lena Dunham.
IG: 150K

My other all time fav. What else would they go down for? ? #it #parody

Saher Sohail @The PakistaniMarthaStewart – Growing up desi in America can be challenging, especially for those of us who did that before #desipride materialized online. Saher Sohail, a Pakistani-American artist based in Virginia uses that dichotomy as an inspiration for her art. Her illustration based Instagram account highlights the life of a Pakistani-American girl, where Sohail navigates her identity through pop-culture inspired desi memes and features links to her extremely popular Etsy page. In Sohail’s world, Winifred Sanderson from Hocus Pocus does kaala jadoo (Desi black magic) while Drake wears a skullcap and deals with ‘Zee TV (popular Indian channel) and Chill’. Even as Sohail’s humor orbits around the desification of Instagram meme culture, her unique perspective and recognizable style make sure she stands out in a crowd.
IG: 97.4K

Nidhi Chanani @nidhiart — Nidhi started out in non-profits before she launched Every Day Art, an online art store that features her musings on everyday life. While Pashmina, Chanani’s award-winning graphic novel that centers on the life of a first-generation Indian American girl, is fairly recent, this SF based artist has been making waves for much longer. In 2012, the White House honored Nidhi Chanani as a Champion of Change for her groundbreaking Asian American illustrations. Currently, she has two more graphic novels in the works including a Disney commissioned feature based on Aladdin. But no matter the genre or topic, Chanani admits that her ‘Indian-ness’ comes through her work, either as a motif, setting or characters. Additionally, her work has been featured on The Nib, Paramount Pictures, and Disney.
IG: 16.5K

Why Asian Americans are an Exciting Customer Group for Financial Management

Asia Tech 101 – WeChat Basics
Thank you very much for your interest in “8 Industries Disrupted by Asian Innovation and How U.S. Brands Can Benefit.”
Please enter the information in form below to access the report.
Scroll to top