On a fall weekday night in an artsy district of Long Island City, New York, a group of well-dressed young Asians walked into the sales room of GALERIE, a new luxury condominium located right across the street from MoMa PS1. Their tour of the building blueprint was guided by Ting Ko, an experienced bilingual Chinese American real estate broker. After the tour, the visitors and Ting friended each other on WeChat, a hugely popular Chinese social media app, to continue the sales conversation online. “We’ve got a lot of interests from Asian American buyers. This is a new generation of buyers that is investment-savvy yet values lifestyle and quality. Their confidence and sophistication are very impressive,” Ting summarized.

This is true. We’ve seen numerous headlines about how Asian buyers snap up pricy homes in New York, Los Angeles and Atlanta. Asian Americans, on average, are indeed buying more expensive homes and paying a higher percentage of down payment than other customer groups in the U.S. Financially stable and investment savvy, Asian Americans are indeed an exciting customer group for luxury properties. What other industry should not miss this group? Financial management.
This customer group has some strong and unique financial characteristics.

1. Young
Generally in the U.S. Baby Boomers and older generations hold the most wealth, but interestingly, Asian Americans’ wealth is more in the hands of the 20s-to-40s demographics.

Close to 70% of Asian Americans are born in Asia where private wealth has seen an explosive increase in the past few decades. As a result, we’ve seen an influx of self-funded Asian international students, tourists and investors coming to the U.S., especially Chinese. Due to the One Child Policy, most Millennials and Gen Z Chinese American immigrants are the only heir to their families’ assets accumulated through generations. Just imagine a wealth pyramid, but flip it upside down.

2. Inherent savers
Perhaps it’s genetic? 86% of Asian Americans hold a savings account, compared to 76% of the general population, and their average balances are much higher ($63,800 vs. $40,100). So when financial hardships strike, Asians are more confident and prepared to handle it – over 60% believe they could maintain their current lifestyle for a year or more if their household lost all its regular monthly income, versus 27% of the general population. 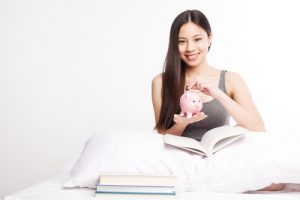 Asians on average save more than their general population counterparts.

One particular saving purpose for Asian Americans is kids’ education. Even though college tuition fees are at historical high, close to half of Chinese American and 33% of Asian Indian parents still intend to contribute at least three quarters or full college expenses for their kids, compared to 27% of general population. And they act on it – majority of young parents have already started to contribute to college saving account before their kids turn 5. Chinese American families’ rank amongst the highest savings, way above general population ($29,219 vs. $19,124).

3. Avid and prudent investors
Asian Americans don’t just over-index by general population by 1.3 times in real estate investment. They are also more inclined to own individual stocks, corporate and municipal bonds and various types of annuities.

They are a research-oriented and well-informed customer group, keeping up with happenings in the financial market, both locally and abroad, and tend to use analyst reports when making investment decisions. At the same time, Asian Americans demonstrate a higher propensity to consume financial information from less traditional sources, such as social media, and rather place significant trust in family and friends for financial advice.

Aside from gathering and digesting a great deal of financial information, Asian Americans also demand control on their own finances. Being intimately familiar with the companies or stocks they invest in helps boost their sense of security.

4. Early adopters of digital financial management
Over-indexing in internet and smartphone ownership and usage, Asian Americans are changing how they bank growing more open to exploring and using digital tools for their financial needs such as mobile banking.

Such behavior is also driven by Asia’s blossoming digital wealth management.. In addition to the prevalence of mobile payment such as WeChat Pay and Kakao Pay, the surge of digital investment services like Alibaba’s Yu’E Bao are shaping people’s views and expectations on financial management in Asia, which drive the digital transformation of some of the most established financial institutions. For instance, Citibank in Korea has reduced its physical branches to 44 from 133 in 2017, and plans to double the size of its wealth management business in Korea in the next few years. “The way people are measuring the accessibility of their bank is changing. It’s a completely different game now,” said Brendan Carney, Citibank Korea Inc.’s consumer banking head.

Curious to know more about how to engage this customer group? Drop us a call.

Three South Asian Graphic Artists You Should Know About
Thank you very much for your interest in “8 Industries Disrupted by Asian Innovation and How U.S. Brands Can Benefit.”
Please enter the information in form below to access the report.
Scroll to top