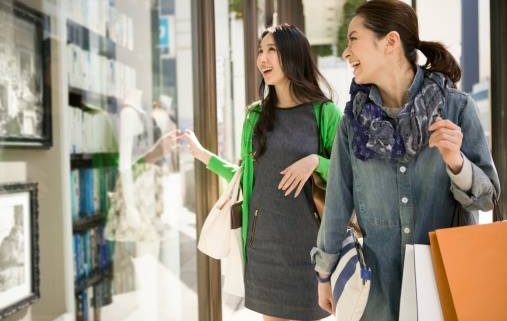 An overview of the Spending Power of the new generation of Asian Americans.

Manhattan, New York: A middle-aged Chinese woman stands in front of a floor-to-ceiling glass window, looking at the lush Central Park view, and tells her broker to seal the deal on the apartment. She makes an offer of $6.5 million. She wants to send her daughter to Columbia or perhaps Harvard, so she needs to be in the center of the city. “How old is your daughter?” asks the broker. “Well, she is 2,” she answers.1
University of Illinois, Urbana–Champaign: A Chinese international student named Michael just moves to the US to attend college. The generous allowance provided by his parents is far above what he needs for normal campus expenditures, so Michael uses the excess cash and buys himself a Cadillac Escalade at $80,000.2 These real stories are just the tip of the iceberg, when it comes to describing the staggering spending power of Asian Americans. In multicultural marketing, the populous Hispanic and African American groups, by default, are many brands’ strategic focus. In terms of population, 56 million Hispanics & 44 million African Americans inevitably outweigh 18 million Asian Americans in the US.3 But if the benchmark shifts from population size to spending power per capita which is of significant importance to business, the prioritization will immediately see a dramatic shift towards Asian Americans, as their spending power per capita is nearly equivalent to that of Hispanics and African Americans combined.3 As a group, Asian Americans collectively have $825 billion4 to spend and this figure is growing at an unprecedented rate.

The remarkable economic power of Asian American consumers is largely attributed to the group’s high-speed demographic growth and rapidly evolving socioeconomic profile. Asian Americans are the fastest-growing (up 58% from 2000 to 2013) and most culturally diverse group in the US (primarily composed of 6 ethnicities – Chinese, Asian Indians, Filipinos, Vietnamese, Koreans and Japanese).5 The population increase is fueled significantly by recent arrivals. Amid a decade-long surge in Asian immigration, China and India have, as of 2014, replaced Mexico as the two largest sources of new immigrants to the US.6 Notably, unlike previous generations who fled to the US in the tumultuous ‘60s and ‘70s, recent Asian immigrants are coming from an ascending Asia. The majority grew up in urban middle class families and received solid educations before moving to the US for higher studies (mostly self-funded), job opportunities or family reunions. In the past few years, China and India have surpassed all other countries as the top two sources for the enrollment of international students at US colleges7 and as recipients of US visa programs for highly skilled workers.5 From smaller towns in the Midwest to metropolitan cities that line the coasts, Asian immigrants have become a uniquely vibrant source of income for local economies. But it’s not just the skilled. It’s also the rich. America remains inarguably the no.1 migration destination for wealthy Asians, particularly Chinese.8 In 2015, 84% of the investment-based US immigration program EB-5 visas, which require a minimum of $500,000, were issued to rich Mainland Chinese9, and there are plenty more on the wait list.

The influx of new immigrants along with the rise of American-born Asians are continuously boosting Asian Americans’ professional competitiveness and earning power. Comprising only about 6% of the nation’s population5, Asian Americans are overrepresented among professional-managerial workers in the US, particularly in technology and engineering, making up a disproportionally large employee base in Silicon Valley’s tech giants (34% of Google’s staff and 41% of Facebook’s).10 Interestingly, Asian Indian immigrants, benefiting from their native English proficiency, have demonstrated great strengths in advancing to the Executive Level in today’s US corporations. Pepsi, Microsoft, Google, Adobe all have Asian Indian CEOs. As a group, Asian Indians have the highest median household income ($101,591) and represent the very first US ethnic segment4 to have a median income of more than $100,000. With higher disposable income and desire for a better quality of life, Asian Americans are twice more likely than the US average to pay for a premium for quality and brands.5 They are 3 times more likely to shop at high-end department stores like Saks Fifth Avenue5, and 31% more likely to buy organic food.4 They tend to spend 70% more on skincare products4, and are nearly 2 times more likely to spend $300 or over on a watch.5

The stable stream of recent arrivals has brought Asian Americans’ foreign-born rate up to 75%5, the highest among all US ethnicities, infusing and energizing a contemporary Asian bilingual and bicultural lifestyle. Influenced by the burgeoning economy of emerging Asian markets and empowered by the swift global exchange of digital technology and social media, recent Asian American immigrants and second generations, many of whom are raised with cultural sustainability, have stronger cultural confidence and exert growing influence on the US mainstream, especially on digital and social channels. Eddie Huang, Chinese American TV personality and Fresh off the Boat author, recently collaborated with MeUndies to create bold content that defies racial stereotypes and man body anxiety. Jason Wang, a Chinese American restaurateur and businessman, transformed his father’s small Flushing tea shop into the New York City culinary phenomenon Xian Famous Foods, which counts Anthony Bourdain among its returning customers. The witty performance of Asian Indian comedian and writer Hasan Minhaj at the 2017 White House Correspondents’ Dinner has gone viral and swept the country. There are also active key opinion leaders in culture and fashion like Ryan Higa and Amiee Song. With original content, they interact with millions of followers over social media on a daily basis and cast a deep influence on a wide range of audiences including the mainstream. For brands, these thriving innovators have forged new opportunities to engage with the affluent yet savvy Asian American consumers.

The Asians are Coming

In today’s ultra-connected world, where consumer segmentation has become increasingly complex and fluid, there is another massive opportunity for American brands – Asian international tourists. In the year of 2016, approximately 11 million Asian international tourists visited the US, and among the rankings of annual tourist growth, the top 5 are all Asian countries with China taking the lead as the only country seeing double-digit growth.11 Taking the popular destination New York City as an example, Chinese have surpassed Brazilians and Canadians and will overtake British by 2022 to become the largest tourist group to the city.12 Their overwhelmingly high spending, average $8,000 per person per trip13, surely is exciting news for the US tourism and hospitality industry. Moving from tourism to participating in the American real estate market, affluent Chinese have outpaced all other foreign home buyers with their dollar volume exceeding the total of the next four ranked countries combined14, and their average property price in 2015 was $831,800, compared to $499,600 for all other international buyers.15 So, could the timing be any better than right now to start talking to the Asian Americans? Now, back to the real-life stories we started with: The luxury condo bought by the anonymous Chinese woman at $6.5 million has now shot up in value to $8.9 million1, and Michael has already replaced his Cadillac with a $100,000 Maserati Quattroporte, at the end of his freshman year.2